It is August 2018 when Sarita Rav and Otto de Jong meet each other in Sarita’s hometown Amber, Jaipur, capital city of Rajasthan, India.

Sarita is a singer and teaches music classes to Indians and travellers from abroad, Otto is a drummer and one of those travellers who’s interested in Indian music. After a few lessons, some little jams together and passionate conversations about each others musical cultures they decide to undertake an adventure, start a band and tour together.

In April and May 2019 they undertook their first tour. For a month they played in The Netherlands and France with an unusual and minimalistic setup of just vocals and drumset. Their pure and dynamic mix of North Indian songs and ragas with Western indie and jazz influenced drums is being received with great enthusiasm.

It did not end there, the story continues... After the first tour Sarita and Otto decided to take this international project to a next level under the name of Jaipur Junction. In October and November of 2019 they toured in Europe again and recorded their first album in Utrecht (NL). In February and March 2020 Jaipur Junction toured for the first time in India.

Their first album "Kyon Nahin" is released in the autumn of 2020... While not being able to do any tours, the band is writing new music for a second album. Why not...?

Jaipur Junction is supported by the Performing Arts Fund NL. 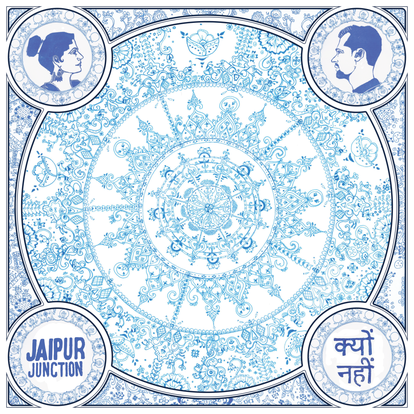 Our album (LP). It'll come on pink vinyl accompanied with beautiful artwork by Maruschka Poolman and a colorful photo by Vishal Nair.

EU only. For orders outside EU, please contact us and we'll figure out how to send it to you.